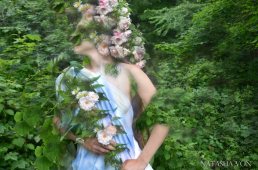 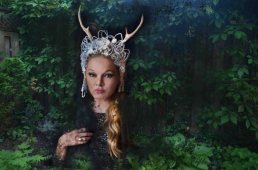 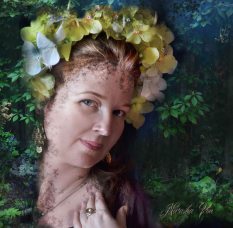 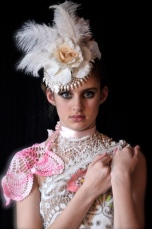 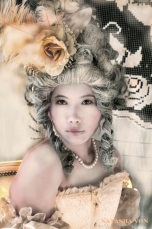 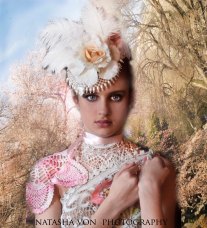 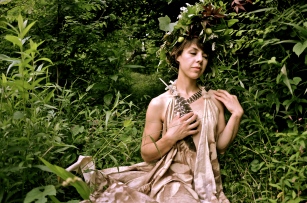 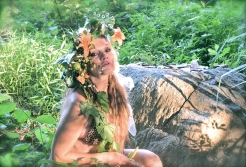 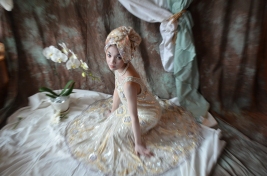 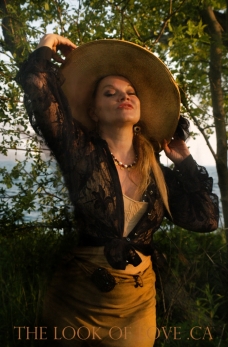 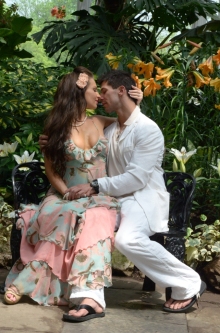 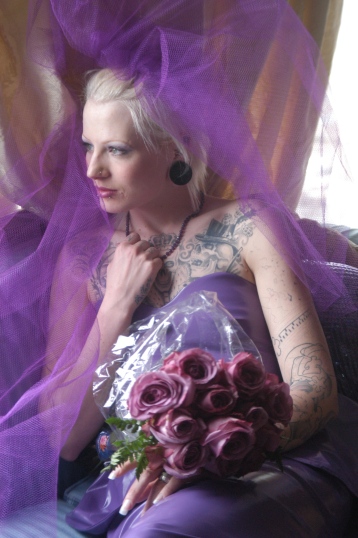 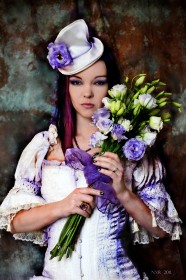 My fantasy HATS … and Headdresses… Magical creations, each one is a small and unique work of art. Some are made entirely with natural elements and flowers like fairy wreaths Others are for city wear, weddings and special occasions. Created with love and and embellished with silk faux flowers, pearls and threads they are made to order and each is a a celebration of the joys of spring… a Chapeau Fantastique !

Willing me towards her, her grey eyes lit the darkness aglow… Snow kept falling steadily all around us. I saw we were not alone… Her companion appeared beside her and fixed his eyes upon me. Looking up I saw a circle of many eyes reflecting the light, behind him. A mantle of grey hung from her shoulders and she wore a crown of white antlers and pearls. She fixed her gaze upon me and suddenly a warm glow entered my blood stream, pulling me deeper into her inner vortex; mesmerizing me in my tracks.

I could feel the eyes of the entire pack gazing with her, all of them blinking in unison; flickers of gold in the night.

It was Embolic. I had come out to pour warm ewe’s milk into the snow to feed the earth for her awakening in the coming spring.  My dreams were in the milk… They were all written on white papers that I had shredded finely. Mixing them with my prayers, I had immersed them in the warm milk sweetened with honey… Wandering out into the night holding my warm pot of milk I searched for an auspicious place to plant my dreams. She had been watching me and following me silently.

With one nod and a sweeping gesture, the pack circled in and surrounded me…

Eyes of wonder ; my eyes as  a child . I was dazzled by flowers . They enchanted me . I knew all their names . My mother taught me . She taught me to sing to them , and to ask their forgiveness  and to thank them , before I ever plucked one . Their spirits would be at peace that way , and would welcome me when I encountered them again .At other times or in other gardens .

Never make an enemy of a fairy .

She taught me how to make fairy crowns each summer . My favorites we would make  in June , weaving daisies and sometimes roses into headdresses adorned them with vines , and other flowers . Singing songs , plaiting and winding the stems of the flowers, my mother taught me to honor their  spirits , and to reach out to them with song . She taught me how to feel out melodies , to speak to them to find their songs , trying several  until  the right tones came .

Songs call out the fairies . The right tone once found , resonates , and calls them out . One must be very quiet , and in a solitary place to call them . Different spirits of Nature respond to different sounds  . Some instruments can call them out of their hiding , like the pipes of Pan .The veil between our worlds is shattered . The song is a passe partout … it opens the doors , and they are freed , Curious , they step into our dimension . we can feel them , sometime we can see them , and sometime , sometimes , they put on their glaomour , and opening their doors , welcome us into their realm of perception .

Midsummer is the portal  . We can then step  through the veils  of parallel dimensions , fairy walking . Enter the world of Flora and Persephone , of our Goddess Gaiia . A world of greem ; of plants and flowers . Entering the fairy realm ,  we can then ask for teaching and seek knowledge , asking  their guidance . That is the place of shamans  and healers . My hand was taken , and I was led there .

The fairy blood runs in my own veins , always passed through the maternal side . My Mother and her Mother had been schooled in the old arts by their mothers and grandmothers before them . A long line of pagan queens , they nurtured each girl child in the old ways as they had been for generations past .

Gathering seeds , saying prayers ,they sang their songs ,roadmaps to another world  ,

gleaning , brewing , spreading their love and their knowledge . And healing …. with the  whispered gifts of fairies .

Working beside her in gardens . Loving and tending the earth . Sifting it and digging it to come close to its’ secrets .

How can one be a healer if you do not know the language of the herbs and plants and flowers … How can you be its’ lover if you have not tended the rose , and been pricked by its; thorns ? But , I am getting so far ahead … years forward . 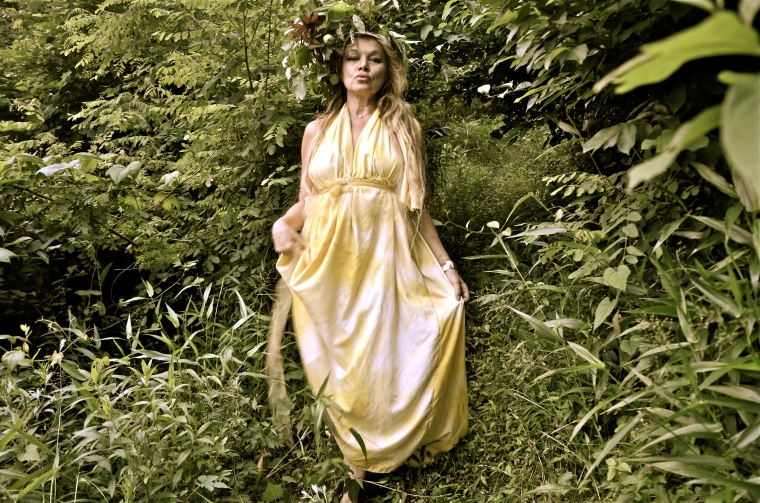 I want to stay there still for a moment longer . Weaving chains of daisies as I did as a child , singing songs , and dreaming of the dreams that I would one day weave into my own crown of flowers .

Freshness and the Eternal Scent of Lilac- the color purple

I woke up slowly , a gentle green world all around me . the trees showing off the their brand new green dresses , The bottle was on my dresser . Without thinking , I reached out and opened it … just another  whiff , I I thought , reaching out for it , as I had once before many years ago . It rushed out at me , all around me , I could feel the air spinning and singing , like a fairytale choir , awesome in its’ silent oratorio , deafening in its’ song of joy .

The scent explodes through my head and heart at the same time .  I felt dizzy , my world was spinning , and a strange joy overcame me ….

I remembered the smell …….. … that exquisite scent . 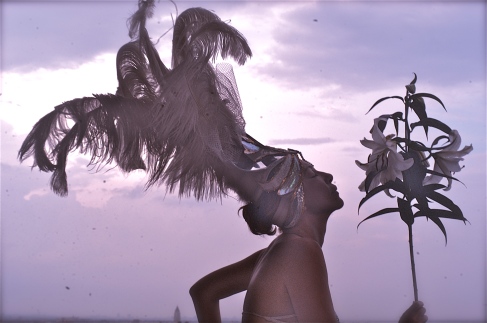 The scent of lilacs – a song of eternal spring , a never ending , time;less youth … The scent that would rush to my head when I tiptoed into my Mother’s room to quietly commune with  its’ magic . There was a sprig of lilac caught in a bottle . Trapped , surrounded by years of memories , in lilac eau de cologne .My gift as a child , entranced by the wonder of the trapped flowers in spring time , I saved my money , and bought the wondrous perfume for my mother’s April birthday , because she loved the lilacs  that bloomed shortly after .  I loved the magic of spring . When I opened the bottle as a child , it was a s if I would unleash the power of sylph spirits , who were trapped , and could finally fly free again .

I would carefully open it , and gently sniff the bottle . closing my eyes . The spirits would rise in a dizzying waft , entering the air  and my being with a delicate rush , like a song , directly into my brain . I would feel my world expand , as if I was wandering in lilac worlds , where time stopped , and lilacs never ended . They would relax , me , and I would wander , my world becoming shades of the color purple , lavender , mauve . They wouldenchant me , tickle , me , entering my nostrils . They spoke to me ,  asking  me to always release them – butt gently , always slowly so they could fly , and work their magic , even to return .

I honored their request , and would tip toe in to release the spirits of the flowers  as often as possible . .

I left the flower spirits alone after that , forbidden to release them . And forgooten all these years , until now , they have always lived inside that bottle . I found it in my Mother’s  precious things drawer , as it always had been kept . Now , grown , so many years later , it sat on my dresser , and it is lilac time again . A perfect spring , tender and fresh , that never ended  is still inside that bottle .  My mother’s life is ebbing .

I held it up to the morning light . The blossoms eternally fresh inside , still trapped in what was now  only a very small amount of the precious lilac water . So many , many years , and every year , the bottle had held their spirits … and I , now grown , have seen the world , and so many springs .The lilacs remain ever fresh . The magical water the bottle holds  is evaporating slowly ;  a strange hour glass … like a life …  eternal with the smell of  spring . 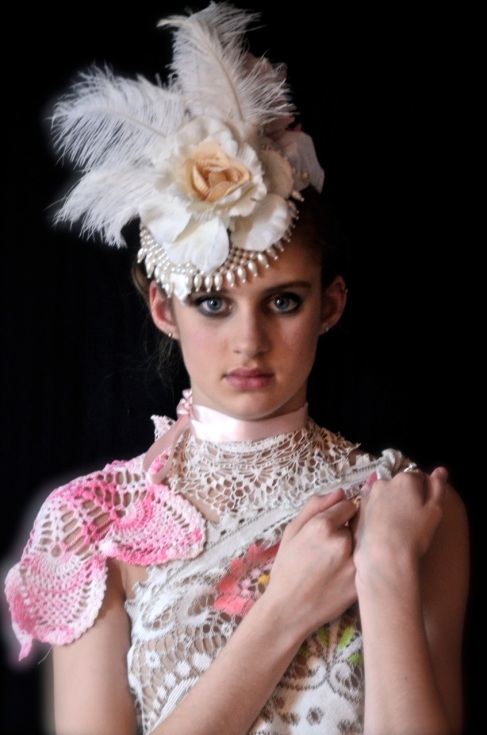 small , but eloquent  Where would bigness be without the small ?

It is the detail that brings the smile , the finishing touch … the sense of whimsy .

The detail brings sparkle , the light  in the twinkle of an eye … the curl in the corner of a mouth … A love letter hidden in a bodice , and springtime  reflected in a young girl’s eyes … and a little hat – on a pretty girl’s head , especially in springtime , is a delicious delight . a little thing , but such an eloquent statement … A wonderful bit of whimsy … a lace collar , a jewel , or an artwork of  hat speaks , sings , and has a presence and personality all its own .

A small detail , and a small package perhaps , but with it comes  amazing style …A silk satin chapeau , pearl embellished , trimmed with ostrich feathers ,hand made and  fit for an heiress from the Great Gatsby Era , this little  detail creates magic as soon as it is put on . Perfect in lieu of a veil for a very modern retro bride …. and  for a Twenties style , Gatsby influenced wedding ensemble .

Available by custom order directly  from NatashaVon ,or on Etsy  https://www.etsy.com/listing/150145681/silk-rose-and-ostrich-gatsby-wedding

Photographed and styled by the designer , and modeled here  by Julia Fairchild.

I love the Twenties style and  era , and especially the beaded and embroidered gowns . They have been an inspiration in my work for  years  … and I also love to sit down , an embroider myself  … having learned from my mother and grandmother as a small girl

It is like a meditation , and gives a sense of peace , and calms the  spirit . http://www.theepochtimes.com/n3/34381-natasha-von-rosenschilde-designs-dresses-great-gatsby-style/

The garments are time less beauties , and are art works in themselves , so unique , and art never  goes out of fashion … These dresses are perfect for a fantasy of a wedding , o an evening of magic  dancing the night away in a gown that clings like warm , molten metal as if hugs your body in motion , and heats up from your skin . .. The the touch of teh glass beads hug every curve  , and touch of the  dress feels like a caress …

Shining out the Light ….

A joyous Solstice and Holiday Season to all , and a Glowing Yule  .. keep the faith .. and   keep shining out the light …with love .

Julie , in the sky with amber and golden jewels … a hand carved honey amber heart , encased in silver arabesques and curls , sits in her fingers , capturing the light , and shining it outwards … On her finger , she wears a golden Lion , hand made and one of a kind , a sculpture in gold  made by an artist’s hand , and cast . Pearls and coral jewels bedeck her crown , and a young deer’s  antlers gathered by the native hunters in the forests of  Quebec  pay  homage to the woodland Goddess who protects  all animals and woodland spirits .

Hat and jewellry  hand made to order by Natasha Von ….available through Etsy … contact us for more information .